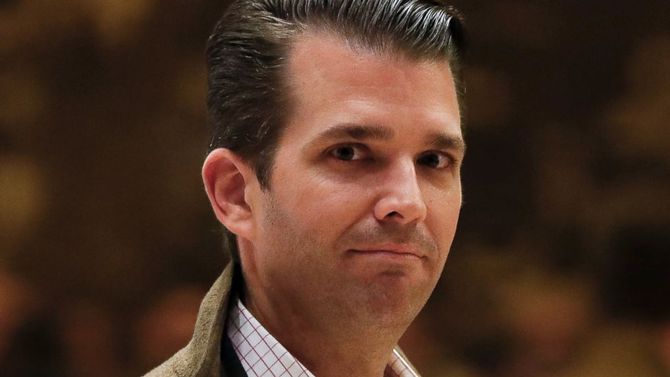 President Donald Trump's eldest son on Monday appeared to mock the sexual assault allegations against his father's nominee for the Supreme Court.

Christine Blasey Ford, a college professor, has come forth with an allegation that Judge Brett Kavanaugh, the president's nominee, assaulted her at a party more than 30 years ago. Kavanaugh denied the charges, releasing a statement Monday that he was willing to speak to a Senate panel to "refute" the allegation.

The photo attached shows a crumpled-up piece of notebook paper with a scribbled message: "Hi Cindy will you be my girlfriend, Love Bret." The note has boxes to check for "yes" or "no" and seems to compare Kavanaugh's accuser to a school yard crush.

Trump Jr. has long been the Trump child most in touch with the president's most ardent voters. He seems to relish the button-pushing, asserting or trolling Tweet. His social media feed has traded in conspiracy theories and hard-line messages about immigration or gun control. He once circulated a post that compared Syrian refugees to a bowl of Skittles candy that contained some that "would kill you."

He's beloved on the right as the swaggering embodiment of the Make America Great Again agenda. And he's embracing his role as a popular emissary for his father, crisscrossing the country on campaign trips, penning op-eds in support of favored candidates and showcasing his new relationship with former Fox News host Kim Guilfoyle.

Trump Jr. has also mirrored his father's combative defiance toward special counsel's Robert Mueller's investigation while downplaying any talk of his own legal exposure stemming from his involvement in a 2016 Trump Tower meeting that's a focus of Mueller's probe into possible links between the president's election campaign and Russia.

Kavanaugh, meanwhile, was seen arriving at the White House late Monday morning. There was no immediate explanation of the reason for his visit. He had been on a smooth confirmation track, but the new allegations have roiled that process.